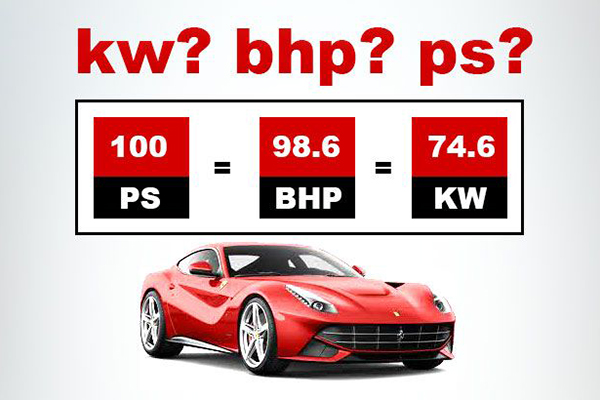 What’s in a Power Unit?

One of the first things people want to know about a car is its power rating. The want to know how fast it will go and in how short a time they might make it from A to B. So, how exactly are these power ratings articulated?

Herein lies the problem. It seems that automakers around the world have been united by their enduring disagreement on which unit of measurement works best. Below is a selection of units currently in use:

First, what are the similarities between these units?

The obvious thing that binds all the units together regardless of their provenance or popularity is that they measure the same thing — power. Though they appear on the surface to house all kinds of differences, there are some quite striking similarities:

Horsepower and brake-horsepower and obviously the closest in meaning. Where horsepower is a rather “raw” unit, brake-horsepower merely tries to improve on accuracy by factoring in the energy loss of an engine caused by friction. That was the idea, at least, but nowadays it seems that the good-old “horsepower” ratings that you see actually take this loss into account anyway.

PS is used in Germany and was created as part of an attempt to make the unacceptably random-seeming horsepower unit more metric. The two units have ended up being quite close, in fact, with 1 PS being equivalent to 0.98HP. The cheval-vapeur (CV) is also very close to HP, with 1CV equalling 0.99CV.

What about the important differences?

When it comes to difference, we have to bring in the physicists’ favourite – the kilowatt (kW). While the automakers scramble about with their different units which all have different names but are within a hair’s breadth of each other in reality, the scientists prefer to use something a bit more standard.

The kW is that standard unit. A single unit of horsepower is the same as 0.74kW, which means that when you convert a car’s power into kilowatts, you do end up with a smaller number. This is anathema to some automakers, clearly, who want their power ratings to sound as high as possible.

This difference potentially explains why European automakers like using PS, since that yields a bigger number even than horsepower. A car with 400PS rating would only be 392hp. There’s something quite appealing about that bigger number.

Why do we even need this power rating?

To some drivers it may seem arbitrary and meaningless. If we’re interested in the car’s comfort, safety features or gas mileage, then the PS or horsepower number might not be interesting. To others, however, it is an essential.

Those with a need for speed will be very keen to know this number, since it indicates how fast the car will go; whether it’s a performance machine or not. They may also want to gain some idea of what it will feel like to drive. The high-hp cars are undoubtedly more exciting for those who seek the thrill.

On the other hand, insurance companies are also interested in power ratings to combine in their formula for calculating premiums. A high-hp car is likely to be seen as riskier, therefore they are very interested to know.

Power units in the age of electric

In the end, perhaps kW will have the last laugh. As more cars turn electric, the kWh rating of the car’s battery is more important than ever to drivers. In the age of the EV, driving distance on a single charge is the new priority of many. Will our beloved power ratings fade into obscurity? Regardless, it is still valuable to know the differences and similarities between them.

This website uses cookies to improve your experience while you navigate through the website. Out of these cookies, the cookies that are categorized as necessary are stored on your browser as they are essential for the working of basic functionalities of the website. We also use third-party cookies that help us analyze and understand how you use this website. These cookies will be stored in your browser only with your consent. You also have the option to opt-out of these cookies. But opting out of some of these cookies may have an effect on your browsing experience.
Necessary Always Enabled
Necessary cookies are absolutely essential for the website to function properly. This category only includes cookies that ensures basic functionalities and security features of the website. These cookies do not store any personal information.
Non-necessary
Any cookies that may not be particularly necessary for the website to function and is used specifically to collect user personal data via analytics, ads, other embedded contents are termed as non-necessary cookies. It is mandatory to procure user consent prior to running these cookies on your website.
SAVE & ACCEPT

Need help? Chat with us!
Start a Conversation
Hi! Click one of our member below to chat on Whatsapp
The team typically replies in a few minutes.
Kraken Racing
Kraken Racing